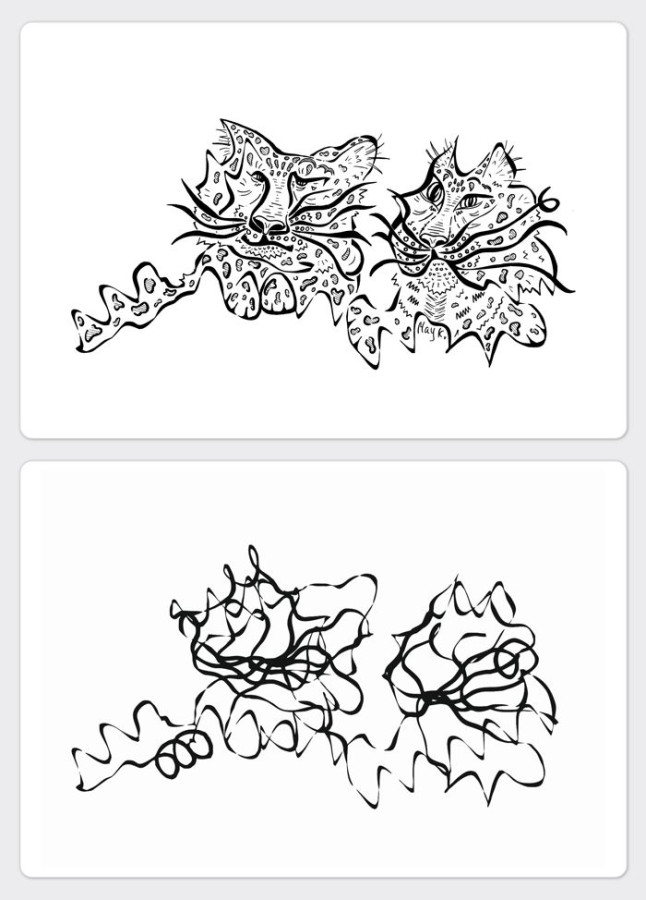 This drawing was initiated by a good friend who is working on the BARS protein and is enthusiastic about small and big cats. As in the Russian language the snow leopard is often termed “(snow) bars”, the protein structure inevitably resulted in this feline couple.
BARS is a multifunctional protein. In the nucleus, it can bind a specific DNA region and thereby regulate the transition from epithelial to mesenchymal type of tissue. In the cytosol, it plays a role in membrane fission, including fragmentation of the Golgi apparatus.

Another request from 2012, sorry for the huge delay, najas! 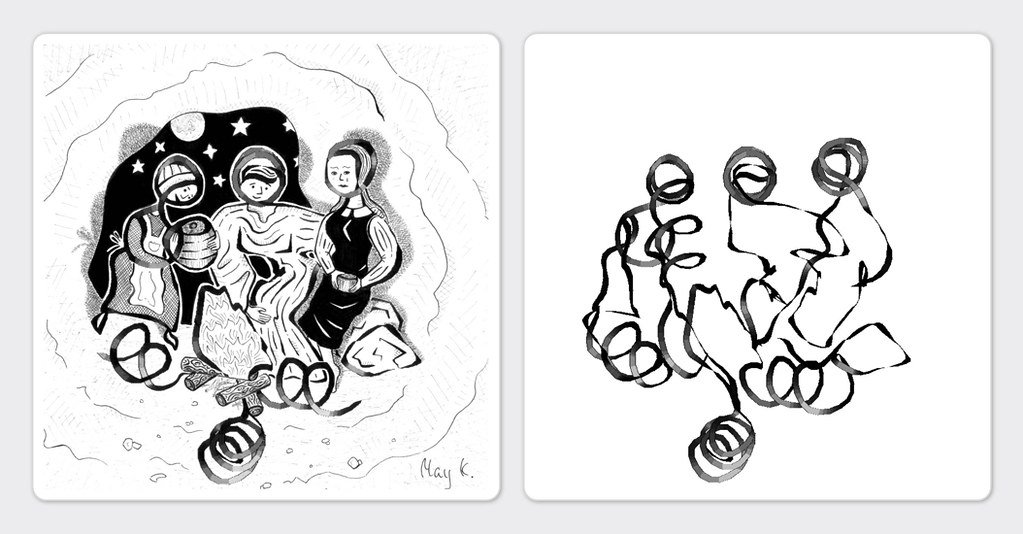 This scene is based on the integrin α2β1 I domain. Integrins are transmembrane proteins establishing connections between adjacent cells or between cells and the extracellular space. Integrin α2β1 can bind collagen or laminin and thereby not only ensures adhesion between the cellular skeleton and the extracellular matrix, but also can serve as a signal receiver for the cell.

The name “integrin” originates from the fact that these molecules are integral membrane proteins. Analogously to integrins incorporated into the membrane, members of religious groups such as Amish and Mennonites outlined in this drawing are highly integrated within their communities. An example to this is the warmth that has been bestowed on the sad girl by the other community members.

Some Protein Art motives are now available as (post)cards! 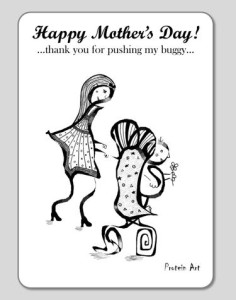 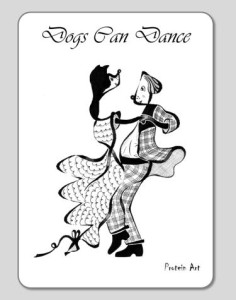 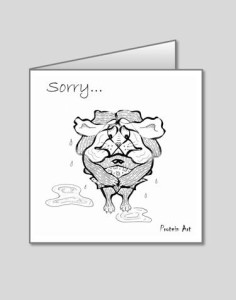 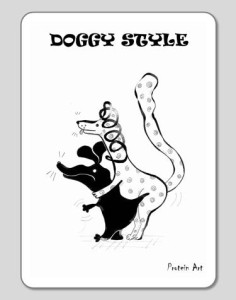 The cards can be ordered via the Protein Art shop at Etsy. In case of shippment to Germany, some cards are also avialable with a discount at Rockys-Onlineshop.

A postcard for the upcoming Mother's Day on Mai 10th is shown beneath. 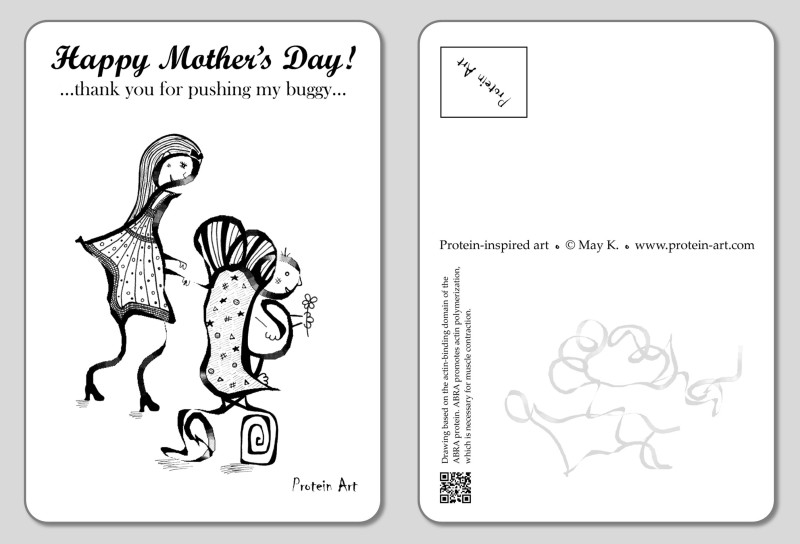 Now some words about the protein behind the Mother's Day card.


This drawing is based on the actin-binding domain of the ABRA protein. ABRA promotes the polymerization of actin, the main structural and functional component of muscles. Only polymerized actin can drive muscle contraction. Thus, ABRA enables the mother to be strong enough to push the buggy and generally bring up her child.

It's been a long time since I've posted a protein but finally I'm back to the proteins and back for you, starting to fulfill your protein requests! The following drawing is inspired by a comment by pensatorkjh back in 2012.

The DNA clamp is one of the most important cellular tools for DNA replication. It encircles the DNA helix which is situated in the center of the drawing and represents an emblem of even-toed ungulates. The clamp itself is drawn as a circle dance performed by deer, sheep, gazelles, and boars. The clamp slides along the DNA and ensures that the polymerase, the actual DNA copying machine, remains attached to the DNA strands. The clamp has distant analogy to a horse collar necessary for the carriage to remain on track.

Dear readers of my blog,

I have to apologize for not being active for a while! I have received many great protein orders and little by little I am working on their realization. But unfortunately, I have a quite tough time this year as the final countdown of my PhD began. I will make up for the missing posts as soon as I can. Thank you for your understanding and patience! Here is a small reward:

Title of Drawing: “Baby Dragon Playing with a Toy House“

Cyclin-dependent kinase 5 (CDK5) is an enzyme which triggers the phosphorylation of a key protein of the reelin signaling pathway. Via this pathway CDK5 is involved in neuronal migration and positioning. For its activation CDK5 needs a cofactor, p35 (a fragment of p35 called p25 is shown in the bottom part of this drawing). Recent studies have shown that CDK5 is required already early on during brain development [1].

Similar to ‘playing games’, CDK5 is necessary for a proper development of children’s brain. This baby dragon playing with his toy house illustrates these connections.

Call for Art & Science Exhibition Proposals – ISMB/ECCB 2013
Scientists and artists are invited to submit images and videos that illustrate research projects, scientific principles and draw a link between art and science.

Images and videos will automatically enter an online contest for a $200 (USD) award.

The negative news for the start:

Now the positive ones:


Neurophysin I together with oxytocin are both cleavage products of the precursor protein preprooxyphysin. Once preprooxyphysin has been cleaved, neurophysin acts as carrier protein for oxytocin. Oxytocin is a well-known hormone. It has many functions, especially in the field of human relationships. For example, it plays an important role in bonding between mother and child. Sometimes a view of a baby face is enough to induce a release of oxytocin.
So mother bear and its baby is a direct illustration of the function of oxytocin and hence its carrier protein neurophysin I.
Here you can see a TED talk about the role of oxytocin. And here is an easy accessible video for the Russian-speaking readers.

UPD: Thank you very much for your help! The winners will be announced in February. Looking forward with excitement!)

My entry has been chosen as one of the top 10 in its category in the International Science & Engineering Visualization Challenge! Now I need your help: If you vote for me, my entry may be designated the People’s Choice.
The 2013 winning entries will be published in a February 2014 issue of the journal Science!!

There seem to be troubles with the login, therefore the voting procedure might be a little complicated:

2. Follow the link you will get in the verification e-mail

3. Follow this link http://nsf-scivis.skild.com/skild2/nsf2012/loginPage.action to login (it is important to use this link as otherwise you the login procedure might not work out)

4. Find my entry “Nature playing chess” and click on “Vote for this entry” (it might be difficult to find as it is written in gray letters)

Thank you so much for your help and sorry for the inconvenience!

This protein was drawn for a friend working on the same floor as I do.
The enzyme Glycogen Synthase Kinase 3 (GSK-3) mediates the transfer of phosphate groups to specific amino acid residues (serine or threonine) of its target protein. Usually phosphorylation by GSK-3 leads to the inhibition of the target. This kinase is involved in many processes of living organisms, one of which is the storage of glucose. This protein is of high interest to researchers as it seems to be implicated in many different diseases, including Alzheimer’s disease, Type II diabetes, some forms of cancer, and Bipolar Disorder.
So in the run-up to Halloween we should follow the example of the glucose storing GSK-3 and stock up on candies!
Collapse